A person named Dudu Khan was beaten to death in the Banistersara area of ​​Sylhet city. This incident happened at the forest’s Kalapara Point at around 11:30 pm on Wednesday.

The deceased Dudu Khan was a volunteer League activist. Locals said that once he was the leader of the Metropolitan Volunteer League, local councilor Aftab Hossain Khan. 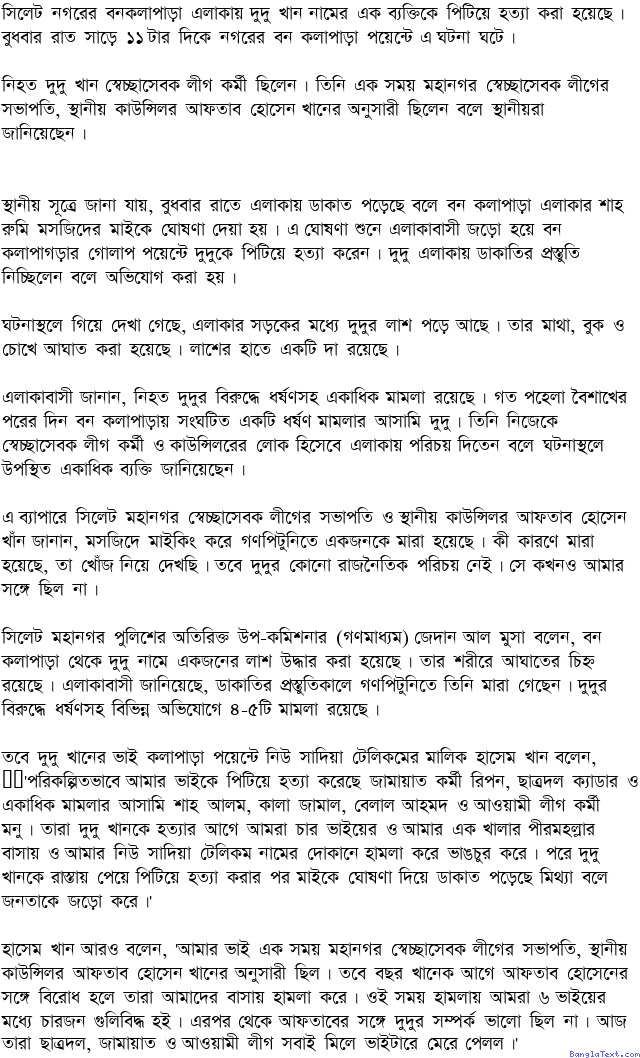 On the spot, the body was found lying in the road. He has been hit with his head, chest and eyes. There is a link in the hands of the body.

Locals said, there are several cases, including rape, against the murdered Dudu. Dudu was accused in a rape case in Banapara, the next day after the first Baishakh. Many people present at the scene told that he used to identify himself as a volunteer league worker and a councilor.

Sylhet Metropolitan Swechchhasebak League president and local councilor Aftab Hossain Khan said that a person was killed in a masking by miking in the mosque. Looking at the reasons for what was killed. But there is no political identity of Dudu. She was never with me.

Sylhet Metropolitan Police Additional Deputy Commissioner (Media) Jeddah Al Musa said a corpse of a person named Dudu was recovered from the forest Kalapara. He has injuries on his body. Locals said that he died in mass mobilization during the robbery. There are 4-5 cases against various crimes including rape against Dudu.

However, owner of New Sadia Telecom, at the Kalapara point of the house, said, “Jamaat activists Ripon, Chhatra Dal cadre, and Shah Alam, Kala Jamal, Belal Ahmed and Awami League activist Manu are accused in more than one case. Before killing Dudu Khan, we attacked four brothers and one in my house in Piramahalla and vandalized my New Sadia telecom name shop. After the killing of Dudu Khan in the streets, he announced to Mike that the robbers had gathered and gathered the mob.

Hashem Khan further said, ‘My brother was once the leader of the Metropolitan Volunteer League, local councilor Aftab Hossain Khan. But a year ago, when they disagreed with Aftab Hossain, they attacked our house. At that time, four of our six brothers were shot in the attack. Since then, the relationship between Aftab was not good. Today, they were beaten by Vitra, student group, Jamaat and Awami League.