Four years after the cancellation of the US Immigrant Visa Program (DV Lottery) for Bangladesh, two US senators have proposed abolishing the lottery system for all. They have recommended passing a law in this regard. And the White House has supported these two senators.

Republican Senators Tom Cotton and David Purdue raised the bill. The proposed law is called the Reform American Immigration for Strong Employment Act. The proposed law would halve the number of permanent residency permits in the United States each year. 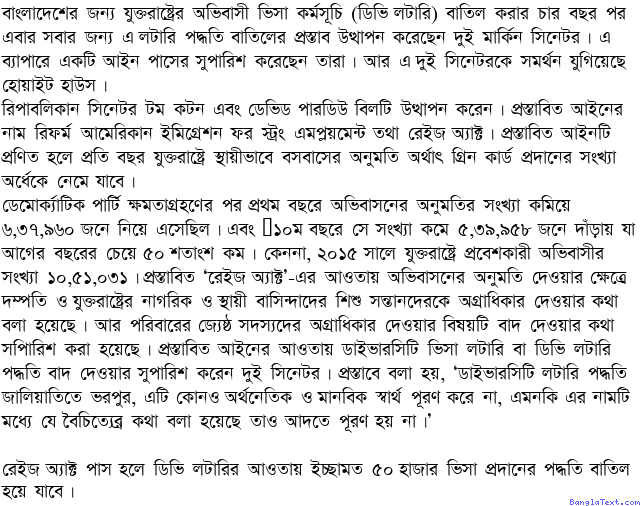 The Democratic Party reduced the number of immigration permits to 8,38,960 in the first year after taking power. And in the 610th year, that number dropped to 5,39,958, down 50 percent from the previous year. The number of immigrants entering the United States in 2015 was 10,51,031. The proposed Rise Act allows couples and children of U.S. citizens and permanent residents to be given priority in allowing immigration. It has been recommended that priority be given to senior members of the family. Under the proposed law, the two senators recommended eliminating the diversity visa lottery or DV lottery system. “The diversity lottery system is rife with fraud, it does not serve any economic or humanitarian interests, not even the diversity mentioned in its name,” the resolution said.

If the Raise Act is passed, the system of issuing 50,000 visas arbitrarily under the DV lottery will be canceled.