New benefits are coming to the UK in bringing people from Bangladesh and abroad on work permits. At least 500 new positions have been created in the Skill Worker Route from next January as part of an equal policy for the post-Brexit period, with at least 500 new positions created, and 60 more new professions proposed on the Shortage Occupation List.

Work permit policy in the current UK will go down from Level Six to Level Three from January. This has the potential to greatly benefit the Bangladeshi community. However, the chef category level in the restaurant sector has not been reduced. But many see the new opportunity as a golden opportunity.

Barrister Lutfur Rahman, a work permit law expert, said that since the chef had reduced the salary from Rs 29,500 to Rs 25,000 since January, they may be looking at it as a change. Skill level has been brought down with new opportunities. Where previously Level Six could not apply for a work permit without the same amount of educational qualifications, now it can be done from Level Three. With the advent of Level Three, many shops and businesses will be created at our community level.

Meanwhile, the Migration Advisory Committee has proposed 70 new jobs on the Mac Shortage Occupation List. The salary is 20,500 pounds. Barrister Lutfur Rahman said it is a survey conducted by Mac every year to find out which specialized positions people need. For example, positions like nurse or scientist or social care were on the short occupation list, this year many professions like butcher, confectionery cake decorators, brick layers are coming. 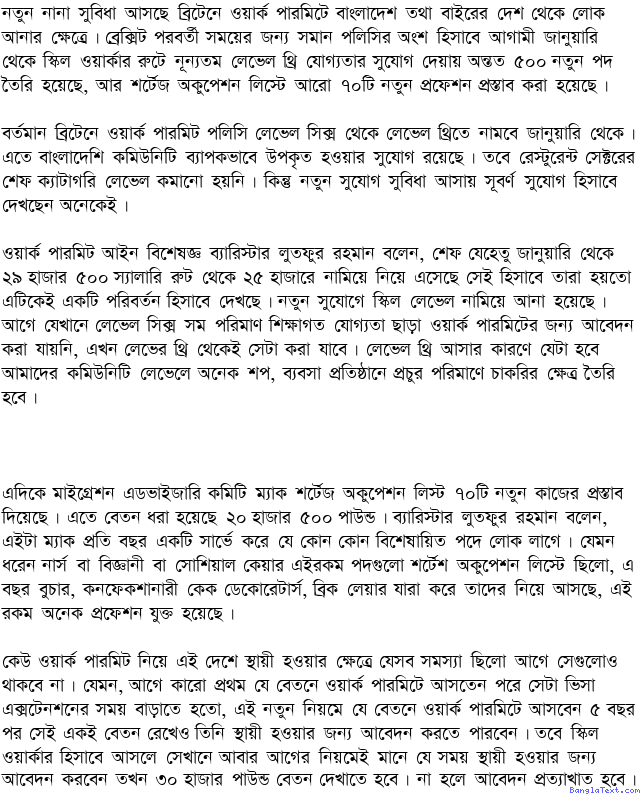 The problems that one had in settling in this country with a work permit will no longer exist. For example, in the past, a person’s first pay for a work permit had to be extended during the visa extension period. Under this new rule, a person can apply for a permanent job even after paying the same salary for 5 years. However, as a skill worker, in fact, the previous rule means that you have to show a salary of 30,000 pounds when you apply for permanent tenure. Otherwise the application will be rejected.In spite of all these rules, ILTS 4.5 must be achieved. However, the companies are less interested in work permits, said the wise lawyer. The government is encouraging companies in various ways to register for work permits. It is learned that only 31,000 companies have already registered for work permits. Which is only 3% of the total companies in Britain. There is much less in the Bangladeshi community.