If there is any obstacle to physical obstacles, if there is a spirit of morale and will, it has proved that Magura Fahim ul Karim. By earning 30 to 50 thousand rupees per month, he is earning only 30 or 50 thousand rupees per day by using only two or three fingers in his body, through online outsourcing. He did not only bring back the wealth of the world by earning money, but he has set an example for the top rated freelancer.21-year-old physically challenged Fahim, living with his parents and younger sister in Magura city’s Bhayana PTI Babu Rezaul Karim is a marketing company of a private company. Fifteen meritorious students of the science department of Magura Government Boys School were suddenly abducted before the JSC examination in 2012. He was taken to doctors and doctors in Bangladesh and India. 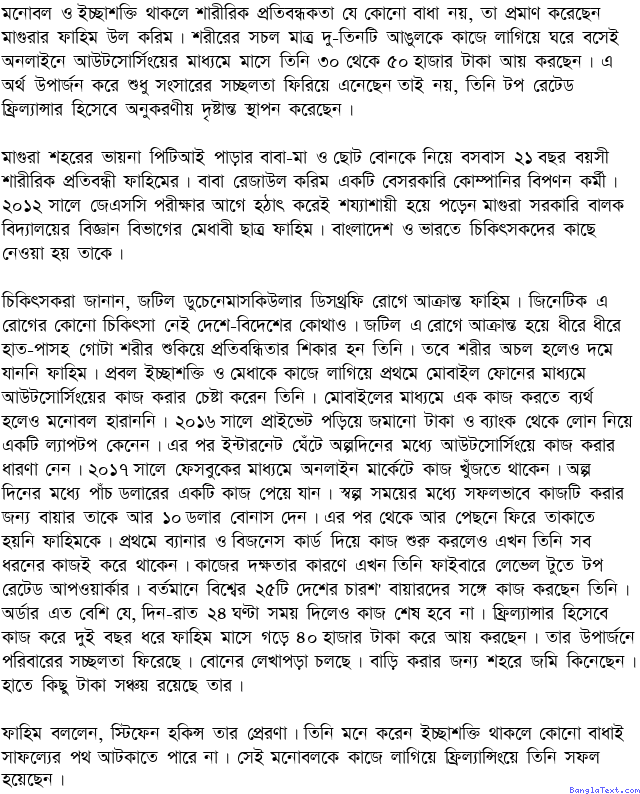 The doctors said that Fahim was suffering from dysentery disease of the complex Duchenmusquillar. There is no treatment of genetic disease anywhere in the country and abroad. After suffering from acute complications, he slowly became a victim of disability due to drying his whole body. But Fahim did not get stuck in the body. He tried to work with outsourcing through mobile phone and using the power of intellectual power first. Failure to do one thing through mobile but does not lose heart. In 2016, buying a laptop and buying a laptop with a loan from a bank. After this, the Internet took the idea of ​​working outsourcing within a short time. In 2013, Facebook was looking for work in the online market. Get a job of five dollars in a short time. To successfully do the job in a short time, the buyer gave him $ 10 bonus. After that Fahim did not look back. He started work with banner and business card first, but now he does all kinds of work. Due to his work skills, he is now ranked as the Top Rated Optimist at Fiber-level Towel. Currently he is working with 400 ‘buyers of 25 countries around the world. The order is so much that day and night give 24 hours, but the work will not end. Working as Freelancer for two years, Fahim earns an average of 40 thousand rupees a month. The family’s well-being returned to his income. Sister’s education is going on. Bought a town land for home. He has some money savings in hand.