In Tangail, one worker is required to pay the wages of 900 to 1 thousand taka. With three meals. However, every paddy in the area is being sold at Tk 500-600. Farmers are not getting the cost of production by selling rice at such low prices. Therefore, the farmers of Tangail Abdul Malek Sikder gave exceptional protest by setting fire on their rice paddy.But it is only protesting, or is there any other purpose behind it, police are investigating it. Tangail Additional.Superintendent of Police Shafiqul Islam confirmed the matter. 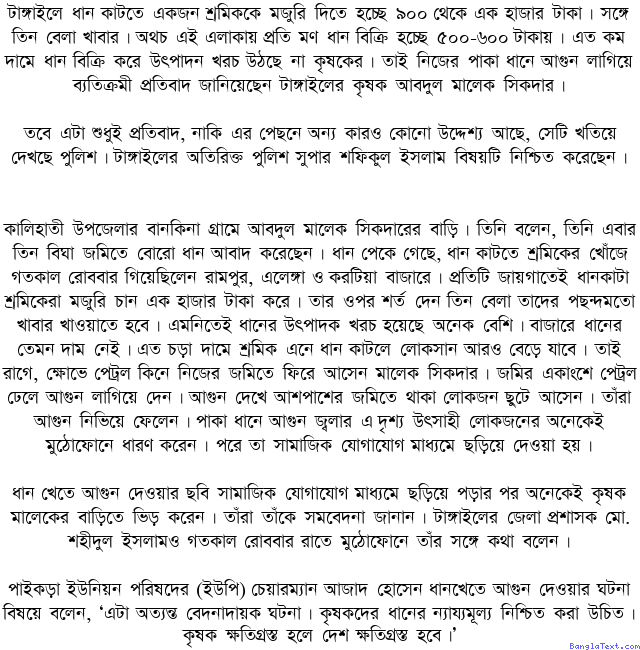 onsider linking to these articles:

Abdul Malek Sikder’s house at Bankina village of Kalihati upazila. He said that he now planted boro rice on three bighas of land. Rice was rushed to Rampur, Alenga and Karatia Bazar on Sunday to search for workers to cut rice. In every place, the rice workers want one thousand rupees for the wage. Provide conditions on them, they will have to eat their favorite food at three o’clock. Thus, the cost of production of rice is much higher. There is no price of rice in the market. Bringing workers at such a high price will lead to further increase in losses. So angry, Malik Sikder came back to his land by buying gasoline and gasoline. Poured gasoline in a part of the land and set it on fire. People from nearby areas ran out of the fire. They extinguish the fire. Many of the people passionate about the fire burning in the rice paddy are in the cell phone. Later it was spread through social media.