On Tuesday (May 14th) at 11am, teachers and classmates of the Gopalganj-Tungipara road conducted human chain program in hand with hands holding hands in the market. They gave slogans slogans demanding execution of rapist Milton Fakir. Later, a demonstration procession started from there and ended up at different places in the same place.
Speaking on the occasion, Tungipara Upazila Awami League Joint General Secretary and President of Kindergarten Association Sheikh Saiful Islam, General Secretary of Kindergarten Md. Hafizur Rahman, Headmaster of Modern Kindergarten School M Matiur Rahman. 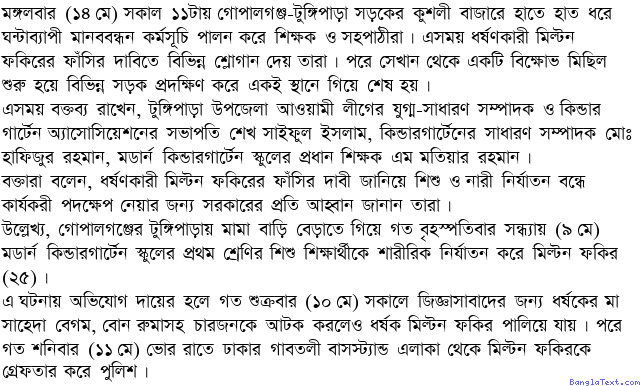 Speakers said they urged the government to take effective steps to stop child and child abuse by demanding execution of rapist Milton Fakir.
Note that Milton Fakir (25) was tortured physically by the first-grade student of Modern Kindergarten School on Thursday evening (May 9th), visiting Mama House in Tungipara, Gopalganj.
On Friday (May 10th), the arrest of the rapist Milton Fakir, for the interrogation of the accused, Saheeda Begum, mother of the rapist, and four others including sister Rumah, were arrested. Later on Saturday (May 11th), Milton Fakir was arrested from Gabtali bus stand area of ​​Dhaka on the outskirts of the city.
Share
Previous NC have not been allowed to apply for smoking students
Next Ministry of Civil Aviation and Tourism Job Circular 2019 -www.mocat.gov.bd