During this time, the Prime Minister said the example of Japanese Emperor Meiji, Japan was backward on learning during the Meiji period. Then he realized there was a lack of student in Japan, lack of appropriate teachers. So he came with technology-based trained thousands of teachers to Japan. In this way, Japan’s knowledge science progressed and the western countries were overthrown. 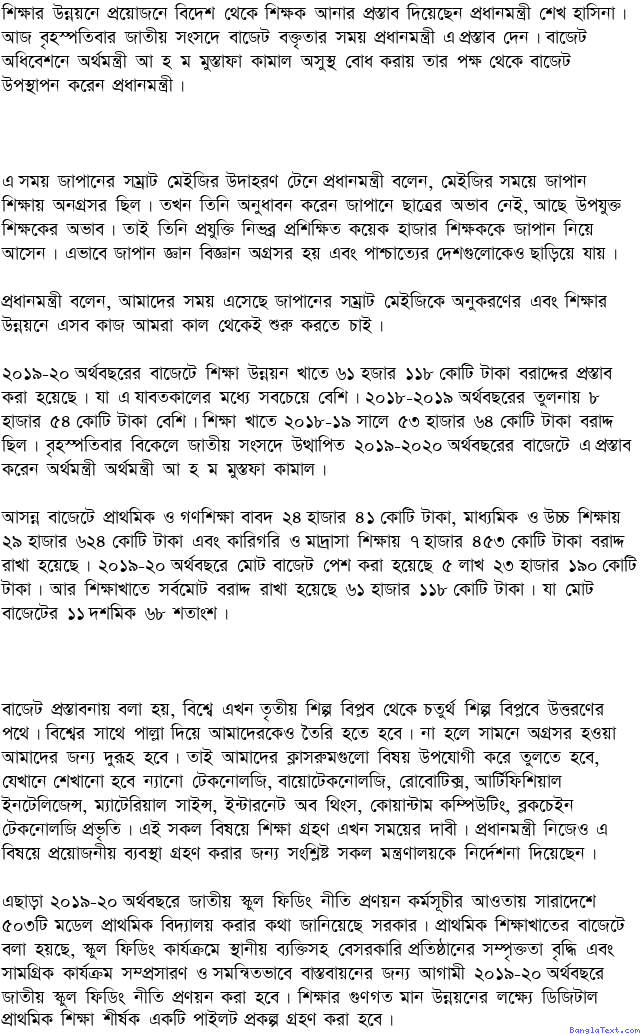 The Prime Minister said, “Our time comes to imitate Emperor Meiji of Japan and we want to start these works for the development of education.”

In the upcoming budget, Tk 24 thousand 41 crore for primary and mass education, Tk 29 thousand 624 crore in secondary and higher education and Tk 7,453 crore has been allocated for technical and madrasa education. In the fiscal year 2019-20, the total budget has been presented to 5 million 23 thousand 190 crores. And the total allocation for the education sector has been 61 thousand 118 crores. 11.78 percent of the total budget.

Budget proposals say, the world is now moving from the third industrial revolution to the fourth industrial revolution. We also have to be ready with the world. Otherwise it will be difficult for us to move forward. So, we need to make our classrooms useful, which will be taught by Nano Technology, Biotechnology, Robotics, Artificial Intelligence, Material Science, Internet of Things, Quantum Computing, Blockcon Technology etc. Learning about these issues is the time demand now. The Prime Minister also gave instructions to all concerned ministries to take necessary measures.

Besides, the government has told 503 model primary schools across the country under the National School Feeding Policy Formulation Program for 2019-20. In the primary education budget, the National School Feeding Policy will be formulated in the 2015-2012 fiscal year to increase the involvement of local organizations including the local feeding program and for the expansion and coordination of overall activities. A pilot project titled Digital Primary Education will be adopted to improve the quality of education.

Under this project, 503 Model Primary School, built interactive classrooms, construction of school rooms, repair and repair of schools on demand, installation of washbalks in the school and installation of tube wells, teacher recruitment, teacher-based training of teachers, supply of computer and ICT content to schools, offices and training institutions. The book distribution and stipend activities are real Will be entertained.