It has been learned that captain Mashrafe Bin Mortaza returned to the country on Saturday (May 18th) after winning the trilogy Trophy trophy. Returning to the country, he learned that farmers are deprived from the fair prices of rice. Their production costs are not even rising. Where a Mono is purchasing rice from the government, at a rate of Tk 40, the farmers of Narail market are selling around Tk 600-600.

After knowing about the matter, at around 10:00 pm, MP Mashrafe ordered the district administrator Anjuman Ara to take necessary steps to directly buy the rice from the farmers. Mashrafe said, “If there is evidence that rice is being purchased through a syndicate, strict action will be taken.” 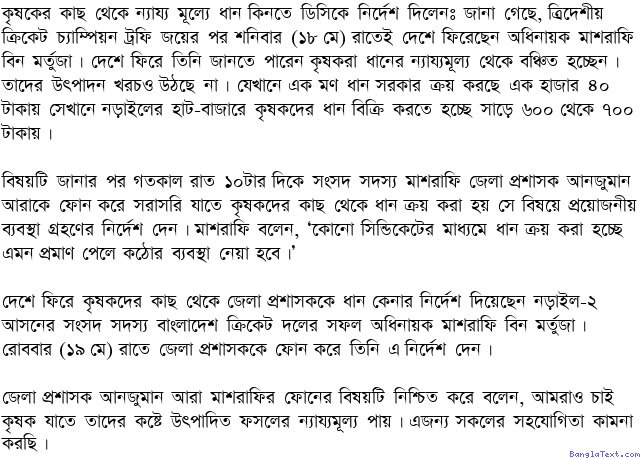 After returning to the country, the district commissioner ordered the purchase of rice from the member of the parliament, Narail-2, the successful captain of the Bangladesh Cricket team Mashrafe Bin Mortaza. On Sunday (May 19th), he ordered the Deputy Commissioner to call him.

Deputy Commissioner Anjuman Ara Mashrafi confirmed the matter, saying, “We also want farmers to get fair prices for their produce.” For this reason, I wish all cooperation.