Malaysia has expressed interest in hiring workers from Bangladesh free of cost. In this case, Bangladeshi workers can go to Malaysia only with airfare and medical expenses. A Malaysian delegation is coming this month to discuss the matter with Dhaka.

According to the Malay Mail, Malaysia has expressed interest in hiring workers from Bangladesh at no cost like Nepal, as promised by Prime Minister Mahathir Mohamad. Staff will pay only airfare and medical expenses. In some cases, the employer can also bear the cost. For this, the talks of Kuala Lumpur with Dhaka have come a long way.

M Kulasigaran said the matter has been discussed with the Bangladesh government. Negotiations are almost final. The agreement with Bangladesh can be the same as the agreement with Nepal. If this agreement is reached, there will be no cost to go from Bangladesh to Malaysia. Recruitment agencies will bear the service charge, airfare, visa fee, health check-up, security expenses and other expenses.

Kulasigaran said it was one of the first steps the United States was taking to deal with a possible trade embargo. Malaysia has already signed an agreement with Nepal on hiring workers on the same policy. He said the Malaysian government had stopped taking workers from Bangladesh in 2008. The two governments have discussed the issue more than once. The talks also yielded positive results. 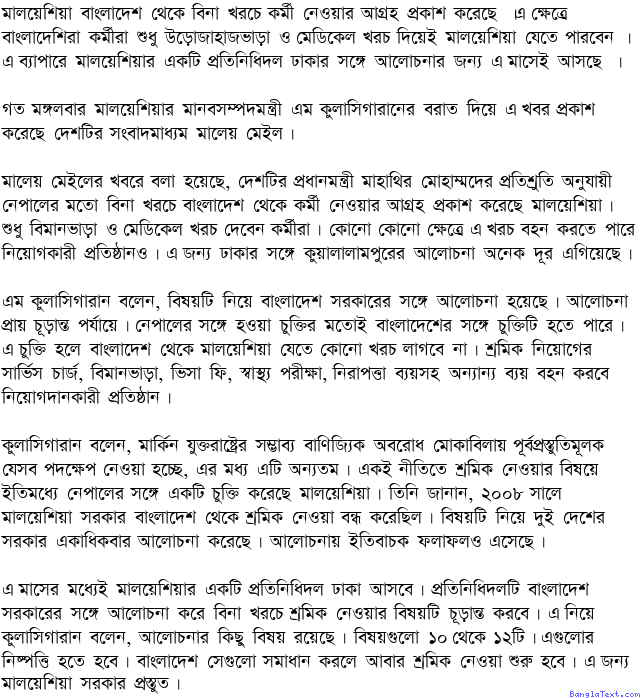 A Malaysian delegation will arrive in Dhaka within this month. The delegation will finalize the issue of hiring workers free of cost in consultation with the Bangladesh government. In this regard, Kulasigaran said, there are some issues to be discussed. Topics 10 to 12. These have to be disposed of. If Bangladesh solves them, it will start hiring workers again. The Malaysian government is ready for this.