The Italian government has announced its immigration policy this year. Although Bangladesh has been blacklisted for several years, this year Bangladesh has been included in it.There is a clause in the announcement for investors. Any person or organization from Italy or outside the European Union investing 500,000 euros in Italy will be granted permanent residency in Italy.

However, by investing 5 lakh Euros, he has to guarantee that his organization will provide employment to at least 3 people.

How to get Italian Visa

About 5 crore Euros or about 5 crore Bangladeshi Taka should be invested and a business plan should be made, where at least 3 or more people will be employed. Only then will the Italian green card match. With this card, he will have the opportunity to do business and live in the whole EU country.Italy is the first country in the world to have the opportunity to gain legitimacy through investment. This is basically the government’s plan to boost the country’s economy.

Italian seasonal job visa has been opened for Bangladeshis. About 30,650 applicants in two categories will be allowed to enter Italy. If one of these classes wants, they will get the opportunity to live in the country permanently.The Italian Interior Ministry issued a circular in this regard on Monday. Applications can be submitted from Tuesday to December 31. You have to apply by filling the online form prescribed by the Ministry of Home Affairs of the country.It is learned that 16,000 applicants will be allowed to enter Italy for seasonal work first. But in this case applications will be accepted in two categories. In case of agriculture, hotel tourism, staff will be hired for 6 months. When the time is up, they will have to return to the country compulsorily. Italian government has announced its immigration policy this year

Italian government has announced its immigration policy this year

In the second phase, 12,650 workers will be recruited for permanent, self-employment and conventions. They will be able to take the opportunity to live permanently in Italy. Or this class of workers or investors in a business can live in the country of their choice.Bangladeshis used to be given seasonal visas in Italy. But according to the conditions, it was compulsory to return to the country after 6 months, but many workers did not return. That is why Italy cancels seasonal work visa from Bangladesh. 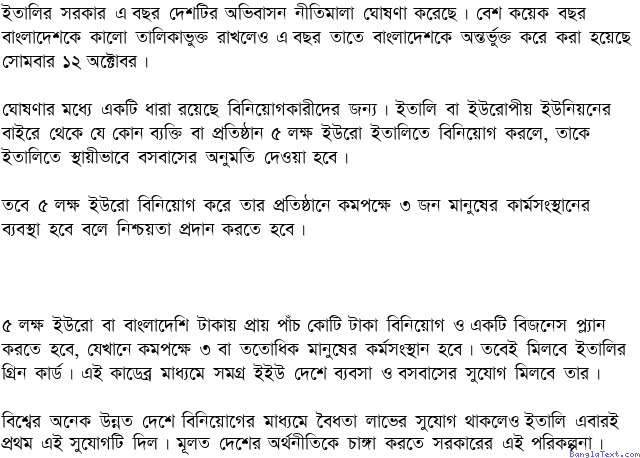