Awami League General Secretary and Minister for Road Transport and Bridges Obaidul Quader has said that if the government is formed this time, one unemployed person from each family will be given a job. When the BNP comes to power, there will be a flood of blood in Bangladesh and a mountain of corpses will be built. The Awami League leader said the BNP is now random, losing before losing. The BNP will never be victorious. In the month of this victory of the war of liberation, the anti-independence forces will be defeated. The BNP has terrorists, corrupt people and murderers. The people of the country have rejected them.

There will be one unemployed person from each family: Kader

The bridge minister further said that no development has taken place in the area even after five years of the BNP rule. However, in the last five years, 98 percent of the electricity-connection, including the construction of school-college buildings have been various developments. In order to continue this development, it is necessary to forget all the differences and make the candidate of the boat the winner, otherwise, the people of the area will be deprived of development. Hawa Bhaban will be built again if BNP comes to power, the country will be a champion again in corruption, the minister said, adding that Sheikh Hasina has brought the country to the path of light. If BNP comes to power, the country will go back to darkness.

Initiative to provide employment to one person from each family 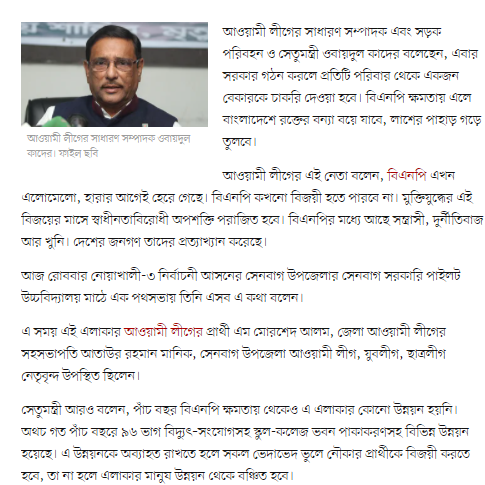 If you don’t want to see the fire-terrorists of 2014, then the candidate of the boat has to win by voting in the boat on December 30. If the Awami League is not the opponent of the Awami League, then the victory of the Awami League is inevitable. In the forthcoming budget, an initiative is being taken to provide employment to one person from each family. The finance department is working to formulate this year’s budget by emphasizing the importance of transforming the village into a city and providing jobs to every family. Prime Minister Sheikh Hasina has instructed us to pay special attention to those two issues. For this special allocation will be given to the rural sector. This information has been known from the sources of the Ministry of Finance.

According to sources, the upcoming budget is being prepared by giving priority to the election manifesto of the ruling party Awami League. The main theme is ‘Village will be the city’. The budget will outline the gradual transformation of villages into cities. It is learned that Finance Minister AHM Mustafa Kamal will present the budget in the National Assembly for the first time on June 13. The budget that he will present in the amount of more than five lakh 24 thousand crores will be an exception in some cases. First, the entire budget is being sorted out on the basis of the Awami League’s election manifesto. Second, even if the means and size are large, the budget will be short.

The budget officials of the finance department said that in the coming budget there will be efforts to modernize the village and reduce unemployment. For this, an initiative of the neighboring country India is being taken as a role model. In India, the ‘Employment Generation in One Hundred Days’ initiative was taken. Despite the controversy surrounding the initiative, the country has succeeded. Success has been found especially in remote areas. Much like that, the finance department is working on the initiative to give jobs to one person in each river. For this, a separate project called ‘Employment’ may be undertaken. It can be implemented in a public-private partnership.

According to the finance department, the coming budget is giving importance to the needs of the common man. The finance department is trying to make arrangements for the benefit of day laborers starting from marginal farmers. If the backward villages at the district and Upazila level are developed, it will have a direct impact on the marginalized people. For this, an outline of providing facilities to the city in the village will be presented in the budget. According to sources, the budget will include a number of initiatives to reduce unemployment and establish young leadership. This initiative will be specially mentioned in the will of Prime Minister Sheikh Hasina.

Budget officials said that in order to build a modern Bangladesh, the first thing to do is to reduce unemployment and reduce urban dependence. The Finance Minister has given special directions in this regard. The government hopes that unemployment will come down if every family takes the initiative to provide jobs.