Health News: Corona vaccine for only 189 Tk Scientists around the world now aim to develop vaccines to prevent the deadly corona virus epidemic. Of these, India is working on three antidotes. Two were created by themselves and another by a joint venture between Oxford University in the UK and AstraZeneca.During a recent visit to Dhaka, Indian Foreign Secretary Harshvardhan Sringla said Bangladesh would be given priority if a coronavirus vaccine was developed in his country.

But the way in which Bangladesh will get the Oxford vaccine produced in India will depend on the agreement of the vaccine manufacturer with India, said AFM Ruhul Haque, chairman of the parliamentary committee on the health ministry.”Oxford has approved the production of this vaccine in various countries, including India,” he said. If Oxford allows India to sell, they will sell to Bangladesh. It depends on the negotiations between the Oxford company and India. ” 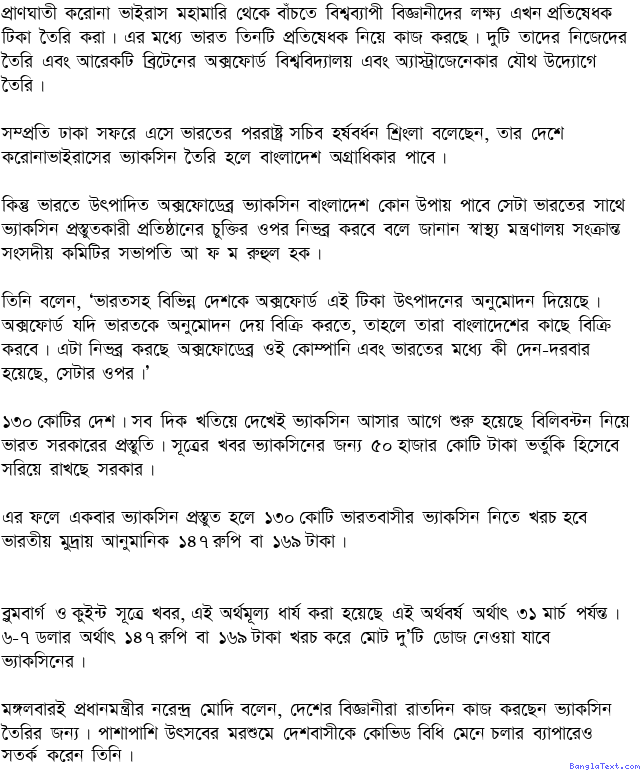 130 crore country. After scrutinizing all aspects, the Government of India has started preparations for distribution before the vaccine arrives. According to sources, the government is setting aside Rs 50,000 crore as a subsidy for the vaccine.As a result, once the vaccine is ready, the cost of vaccinating 130 crore Indians will be approximately Rs 148 or Rs 189 in Indian currency.According to Bloomberg and Quint, the price has been set for March 31 of this fiscal year. A total of two doses of the vaccine can be taken at a cost of  7-8, i.e. Rs. 148 or Rs. 189.On Tuesday, Prime Minister Narendra Modi said that the country’s scientists were working day and night to create a vaccine. He also warned the people to abide by the Kovid rules during the festive season.