Many dream of going to America legally. One of the big ways to fulfill that dream is the DV Lottery (Diversity Visa). But Bangladeshi citizens will not be able to apply in the DB Lottery to be held in the dream country USA in 2022. This information was given on the website of DV Lottery Authority.

But in Bangladesh, a cycle is spreading confusion among the common people by spreading fake news through various social media including Facebook. Even the fake news is floating on the Facebook wall of many Bangladeshi Americans in the US state of Michigan.

According to DV’s website, Bangladeshi citizens cannot apply for the DV lottery. The door to participate in the DV lottery was closed two years ago in 21 countries, including Bangladesh. Due to the high rate of immigration to the United States from these countries, the citizens of those countries have been excluded from the lottery.

According to the website, the US Immigration Authority is giving importance to the countries where the number of immigrants in the US is relatively low in the case of DV lottery. 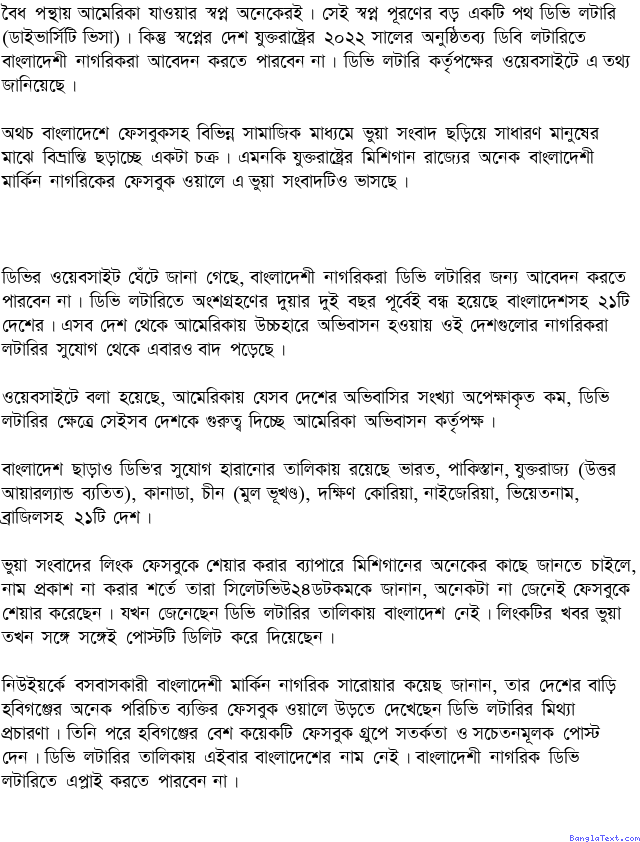 Asked by many in Michigan about sharing fake news links on Facebook, they told SylhetView24.com on condition of anonymity that they did so without knowing much. When you know that Bangladesh is not in the list of DV lottery. The news of the link was fake and he immediately deleted the post.

Sarwar Kayesh, a Bangladeshi-American living in New York, said he saw many well-known people in his hometown of Habiganj flying on the Facebook wall of the DV lottery campaign. He later posted warning and awareness posts on several Facebook groups in Habiganj. This time Bangladesh is not in the list of DV lottery. Bangladeshi citizens cannot apply for DV lottery.