Baba stole milk from the supermarket for unemployed for three months, Dhaka Metropolitan Police (DMP) Assistant Commissioner Jahidul Islam shared the experience of facing a ruthless incident during his duties, on his Facebook. The status posted on Friday night was exactly below: “Last 8.45 minutes yesterday, watching the checkpost duty on the rest of the road. Suddenly, there was a rage of people in one place. I sent one of my sub-inspectors to see what happened. After a while some people brought a 25-year-old 30-year-old man in front of me. One of the questions asked. One said, “Sir, the man was a thief, stealing away”. A security guard holding me tight beside me said, “Sir, the man was stealing from dream super shop and ran away.” 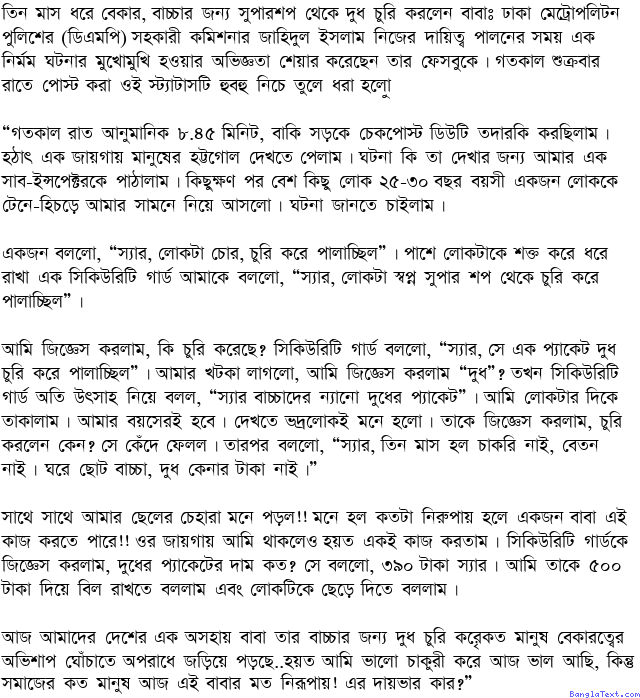 I asked, what did he steal? The security guard said, “Sir, he was stealing a packet of milk.” I was scared, I asked “milk”? Then the security guard said with a lot of enthusiasm, “Sir Nano Milk Packet” I looked at the man. I will be of my age. The gentleman seemed to see. I asked, why did you steal? He cried. Then he said, “Sir, for three months there is no job, no salary. Small children in the house, there is no money to buy milk. “I remember my son’s face !! I think a father can do this if he is helpless !! Although I was in his place I would have done the same thing. Asked the security guard, how much is the milk packet price? He said, 390 rupees sir. I asked him to keep the bill with 500 rupees and asked him to release him. Today a helpless father of our country steals milk for his child … how many people are involved in the crime of stopping unemployment. Today this father is worthless! Who is responsible for this? ”